Geography and Globes in the Classroom

World geography is often seen as a static discipline: a subject that can be mastered by familiarizing yourself with maps and memorizing the names of capital cities. However, our earth is in a perpetual state of flux, not just physically but politically. Politics and global events are constantly shaping the boundaries of nations, dissolving old states, and forging new ones. As a result, atlases, maps, and globes become outdated with surprising speed. In fact, a globe purchased just five years ago is already antiquated! Since 2017, there have been several changes to the political landscape, including Swaziland changing its name to Eswatini in 2018; Kazakhstan renaming its capital city in 2019; and Barbados becoming fully independent from Britain in 2021; not to mention the recent change in the preferred spelling of Turkey to Turkiye. Although these changes may seem small, over the course of twenty, fifty, or one hundred years, the map changes significantly.

Classroom globes and maps are fascinating artefacts because they can reveal not only what the students were learning, but why. For example, globes and other visual aids can help reinforce certain worldviews, as evidenced by the 1847 text Educational Maps for the use of the Schoolmasters (1980.19.1) from the Society for Promoting Christian Knowledge, which states that the study of geography is “[testament] to the greatness and the glory of God” (26). Similarly, the superiority of the British Empire was often expressed in geography classes by learning about the vastness of the Commonwealth. Furthermore, maps and globes help students understand the scope and size of their world. In his 1917 geography textbook, How We Are Sheltered: A Geographical Reader, James Franklin Chamberlain (1980.32.85) argues that the purpose of geography education is to “help the child to grasp, as far as he is capable, those physical and human conditions by means of which the life about him, his life, is maintained” (vi). By this standard, geography helps a child to discover their place both in the community and in the world.

Determining the production date of a globe gives context to the artefact and allows us to better understand its use as an educational tool. The Frontenac County Schools Museum has four globes on display in the gallery and schoolroom, only one of which is definitively dated. This globe is a 16-inch floor model political globe manufactured in Chicago Heights, Illinois by Weber Costello Co. We know that this globe was produced in 1925 because there is a screw beneath the globe inscribed with the year. 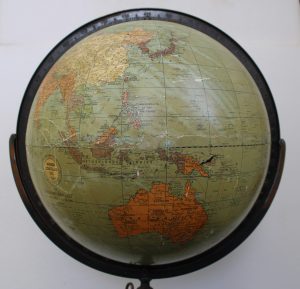 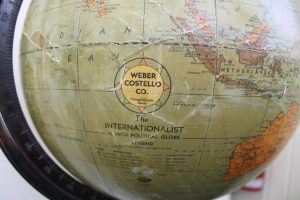 The other globes are not so easily dated. It is important to keep in mind that it may be difficult to determine an exact date because maps and globes are not always immediately updated when there is a political change. For example, Persia was renamed Iran in 1935, but American and German globes continued to use the name Persia for several years. Similarly, one must remember that maps and globes reflect the beliefs and political agendas of their makers. For example, British maps made during World War II may not acknowledge France as a German territory during the Occupation and many modern maps do not recognize the statehood of Taiwan, Tibet, or Palestine.

When attempting to date a map or a globe without a year on the maker’s mark or stand, the first step is to check key locations to determine a general time frame of production. A quick spin can reveal a lot of valuable information about the age of the globe, if you know where to look. I began this process with the second globe in the Museum collection, which is a Replogle 12-inch reference globe with a metal desk stand painted to resemble wood grain. I immediately noted the existence of the Soviet Union on this globe, meaning that it was made between 1922 and 1991. From there, I moved to Asia, where I observed that Korea had split, revealing that the globe was made during or post-Korean War (1950-1953). The African continent offers another easy metric for determining the age of a globe, because the borders and names of African countries changed a lot during the period of decolonization. I was able to spot the Federation of Rhodesia on the globe, which told me that the nation had not yet been divided into Northern Rhodesia, Southern Rhodesia and Nyasaland, as it would do in 1963. These observations provided me with a general timeframe for the globe’s production: between 1950 and 1963. Next, I was able to use web sources to pinpoint a more specific date. I determined that the globe was made approximately between 1960 and 1961 because the globe showed that Nigeria was independent, which occurred in 1960, but that the Union of South Africa had not yet changed its name to the Republic of South Africa, which would occur in the Spring of 1961. 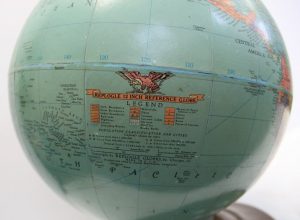 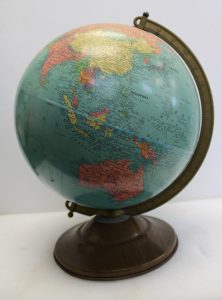 The third globe proved to be more difficult to date due to its condition. The globe is quite faded and scratched from handling, light exposure, and varnish residue. Unfortunately, the maker’s mark is barely legible, but it is possible to make out that it is a 12-inch globe from W. & A. K. Johnston Ltd. Although the globe itself was in poor condition, the Museum did have some paperwork that indicated the globe was likely from the 1920s. Using this information, I followed the same procedure to determine the globe’s age, noting that the Soviet Union was in existence, meaning that the globe had to have been made post-1922. From there, I used web sources to conclude that the globe was from approximately 1929-1931, because Yugoslavia had been established, which happened in 1929, but the North Australian and Central Australian territories had not yet merged into the Northern Territory, as would happen in 1931. 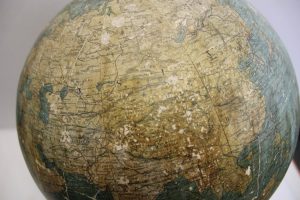 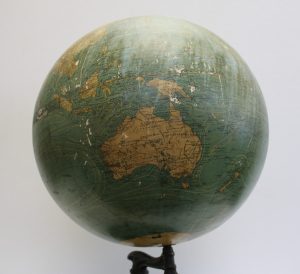 At this point, I had invested approximately an hour and a half into the process of dating the Museums globes, which included tracking down each artefact’s paperwork in our cavernous filing cabinet, gently transporting the globes to my station, and obsessively checking and rechecking my findings. Finally, I came to the fourth globe: a beautifully crafted and incredibly heavy 18-inch globe by Weber Costello Co. on an iron pedestal base. I began with my usual tricks, finding the Soviet Union and determining that Korea was indeed still whole, making my general timeline between 1922 and about 1950. From there, I noticed that the nation of Jordan was still called Transjordan, shrinking my timeline to pre-1946. I then confirmed the existence of Yugoslavia, meaning that the globe was made after 1929. This is where I began to run into some difficulties. The problem with dating a globe from the interwar and World War II-era is that the borders, especially in Europe, are constantly changing, but those changes are not always represented faithfully due to the biases of the mapmakers. I spent way too much time trying to make sense of the European continent before I was able to determine the approximate date of the globe’s manufacture: 1932-1936. Ultimately, I was unable to establish a tighter timeline because of the complicated geopolitics of that era. I did determine that the globe was created after Iraq’s independence in 1932, but before Eritrea, Ethiopia, and Italian Somaliland joined together to create Italian East Africa in 1936. All in all, this globe alone took over an hour to date. 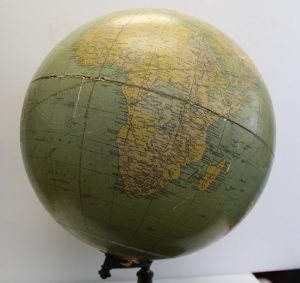 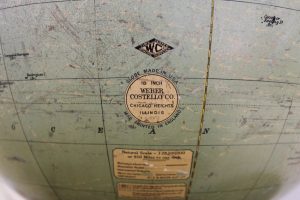 The process of dating a map or globe can be daunting, but fortunately, there are several easy-to-follow guides online to help you determine a general timeframe. If you want a more accurate date, the Wikipedia Timeline of Geopolitical Changes provides an in-depth list to reference against your globe, but be prepared to sink some time into this activity! Ultimately, dating the Museum’s globes was an exercise in patience and attention to detail, but it was well worth the effort to learn more about these wonderful artefacts and to be able to share this knowledge with our guests.

Do you have some free time to offer?

Here are some current volunteer opportunities:

Public Programming and Special Events Volunteer: We are always looking for additional volunteers to assist the museum with our public programs such as: teaching a lesson as an early 1900's schoolmarm or schoolmaster, assisting at community outreach events such as the Regional Heritage Fair and March of the Museums and helping organize and plan other outreach events such as speaker series.

Museum Maintenance Volunteer: Volunteers willing to assist in general day-to-day maintenance of the museum are a wonderful asset to our team. Duties include but are not limited to; tidying, dusting, organizing and picking up supplies for the museum.

Marketing Volunteer: We are looking for volunteers to help us enhance the museum's online and public presence through the development of entertaining and engaging social media posts and preparing marketing packages for schools and community groups in the area.

The time commitments required for these positions vary and can be adjusted to fit your schedule.

Please contact the museum to learn more about these opportunities.

Please visit the Support & Donate page of this website for opportunities.

We want to bring the museum to you! We have developed a virtual museum program with curriculum links to Social Studies, Language and Math. This virtual program has been created through Google and is geared for students in grades 2-4, and teachers!

By clicking the button below, you will have access to everything you need, including information on how to use the virtual museum, links to additional resources, curriculum connections, and more! While this experience has been developed for educators and their students, individuals are able to access it as well!

Please contact the museum at info@fcsmuseum.com if you have any questions!

Take me to the Virtual Museum!